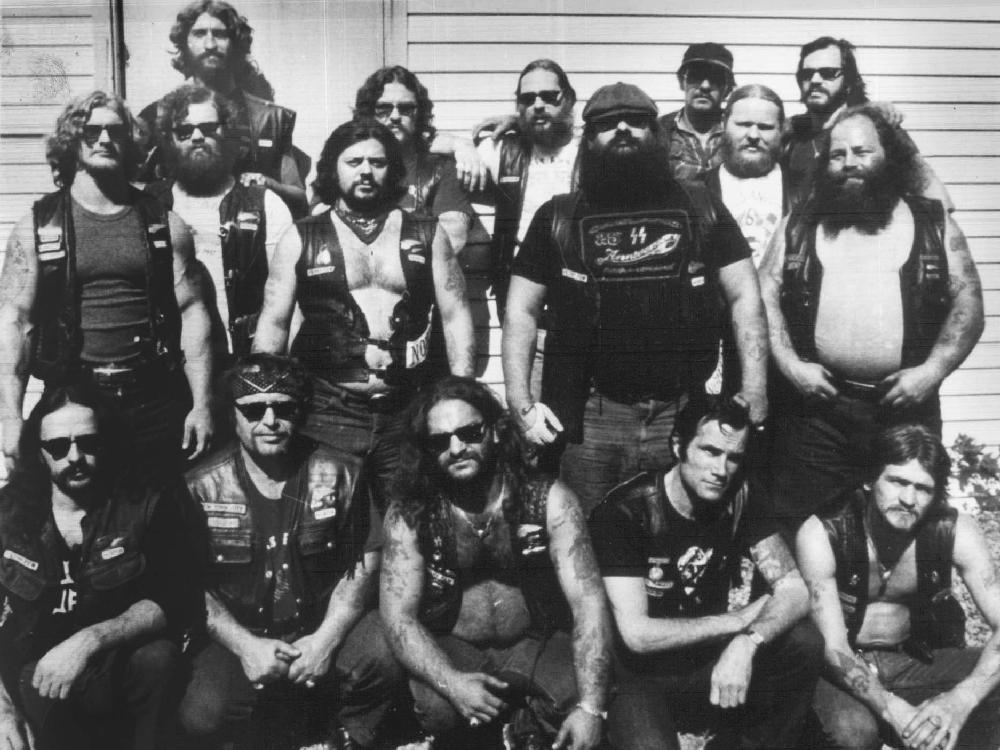 Thirty years ago, the Hells Angels summoned five of their members to a quiet town in the Eastern Townships where they were slaughtered in one of the most notorious crimes committed in Quebec.
When news emerged about what happened on March 24, 1985, inside the Hells Angels bunker on a wooded hill in the town next to Sherbrooke, Quebecers woke up to what the biker gang was capable of in this province. As the bikers involved in the slayings were rounded up in the months that followed, it would have been easy to assume the gang was finished in this province. Only five ended up with life sentences for first-degree murder (about a dozen others who helped dispose of the bodies or get rid of evidence received lighter sentences).

Five members of the gang’s now defunct Laval chapter — Guy-Louis (Chop) Adam, Jean-Guy (Brutus) Geoffrion, Laurent (l’Anglais) Viau, Michel (Willie) Mayrand and Jean-Pierre Mathieu — were gunned down inside the bunker. At least two other members of the Laval chapter were supposed to be killed that day as well, but they failed to show up for the meeting. A sixth man linked to the Laval chapter, prospect Claude (Coco) Roy, was killed two weeks later, on April 7, 1985, by Hells Angel Michel (Jinx) Genest. According to testimony later heard during a coroner’s inquest, 41 members of the gang’s Montreal, Sherbrooke and Halifax chapters were present in Lennoxville when the men were slaughtered.

The bodies were dumped in a river wrapped in sleeping bags and weighed down by cinder blocks and weights.

The slaughter came to be known as the Lennoxville Purge and instead of signalling the beginning of the end of the gang’s presence in Quebec, it surprisingly became stronger in the years that followed.

André Cédilot, a reporter with La Presse when the murders occurred, said it was easy for the public to assume, as arrests were being made, that the gang’s history in Quebec would be short. The gang’s first chapter in Canada, Montreal, was chartered in 1977 and its members set up a bunker in Sorel. Instead of being its downfall, the Lennoxville Purge helped set the template for what was to come and helped turn the gang into one of the most powerful criminal organizations in Quebec, Cédilot said. He also covered other cases where the police rounded up large numbers of Hells Angels, notably in Operation Springtime 2001, and in 2009, in Operation SharQc.

“At that moment (in 1985) the Hells Angels were doing a cleanup to become a real criminal organization,” he said. “Before that, they were disorganized and unruly. They were like a street gang. After 1982, they really started to organize themselves. The cleanup came in 1985.”

By 1985, the Hells Angels had become partners with other criminal organizations, including the West End Gang and the Mafia. Those groups were more businesslike and expected the same from their associates. As the stakes got higher and the Hells Angels became involved in multi-million dollar drug deals, there was little room for sloppiness. Cédilot, who is retired, said he was the first reporter to do a story explaining the motive behind the Lennoxville Purge. It involved a hellscomplicated debt the Hells Angels’ Montreal and Laval chapters owed to West End Gang leader Frank Peter (Dunie) Ryan. But it also involved the Montreal chapter’s growing resentment over how some members of the Laval chapter were constantly partying, consuming cocaine they were supposed to sell and how they didn’t fit into to the plans the gang had for the future.

“The (Laval) guys weren’t following the steps the others were taking. They fit the traditional image of bikers. They were always partying, always high on cocaine. It was going against the new philosophy of the Hells Angels. The other Hells Angels wanted to be businessmen.”

What eventually became clear was that the men associated with the Laval chapter who weren’t considered future elite drug traffickers were killed and any others were placed in other chapters.

The proof of the change in philosophy came in the years that followed. Maurice (Mom) Boucher, who was recruited into the Hells Angels’ Montreal chapter a few years after the Lennoxville Purge, was a thoroughly organized individual while acting as its leader in Quebec. Also, many of the men who are currently members own legitimate businesses.

The five who ended up with life sentences for the six murders have all since been granted parole. But they each took their own paths to get there:

Jacques Pelletier was granted full parole by the Parole Board of Canada, at age 58, on May 6, 2013, but it was revoked last year. According to a police intelligence report on the slaughter, Pelletier was considered to be one of the leaders behind the plot. He was also the person in charge of controlling other gang members who were brought to witness the murders as a means to send them a message to fall in line.

During recent parole board hearings, Pelletier has maintained that all he did on March 24, 1985, was point a firearm in the face of one individual in order to control him and then he burned one victim’s leather jacket with the Hells Angels logo on it.

Pelletier quit the Hells Angels in 1995, which helped convince the parole board that he was done with the gang when he was granted full parole in May 2013. Six months later, on Nov. 21, 2013, a woman approached a police officer on patrol near a park and a school (the location is not mentioned in the recent parole decision) and expressed concern about two men she considered suspicious who had been hanging out in the park for a while.

One of the men turned out to be Pelletier and the other was a man who had been convicted of armed robbery and was part of a criminal organization with ties to the Hells Angels. Pelletier was returned to prison for violating the conditions of his parole, especially one that he not associate with known criminals. He later told the parole board he agreed to do some work for the man that was legal, but he was paid $200 under the table for it. The parole board was disappointed because Pelletier had done essentially the same thing while on day parole, in 2012, and claimed he had learned his lesson. He is incarcerated at a federal penitentiary.

Réjean Lessard, who was granted full parole, at age 55, on Aug. 11, 2010, underwent a stunning transformation after he was convicted on five counts of first-degree murder. While serving his sentence, he quit the gang in 1989 and later stopped hanging out with anyone associated with the Hells Angels. By 2004, a psychiatrist who examined Lessard found that he had abandoned his faith in the Hells Angels in exchange for another faith, Buddhism.

He was granted day parole in 2008 after the board was presented with convincing evidence of Lessard’s change. A parole officer recounted how Lessard showed no interest at all in material possessions and his cell was always completely bare.

“It was an extreme situation. The most serious thing that can happen (in that milieu) is an internal conflict,” Lessard told the parole board in 2008 while confirming the theory that the motive behind the slayings involved the Laval chapter’s consumption of cocaine and the money problems generated by it.

When he was granted full parole in 2010, he was described as “a model of compliance” whose understanding of his religion “has permitted you to radically change your values and behaviour.”

Michel Genest was granted full parole, at age 51, on March 3, 2010. He quit the Hells Angels in 1994 while he was behind bars and serving a life sentence for killing Claude Roy, a prospect in the Laval chapter, days after the Lennoxville Purge. Genest, one of the members of the Laval chapter who was spared after he agreed to transfer to the Montreal chapter, arranged to meet Roy at a hotel on the South Shore and beat him to death.

Genest admitted to the parole board that Roy was killed for not following the Hells Angels rules against consuming hard drugs, like cocaine and heroin, and also because the gang suspected he was a police informant. He told the board Roy died while he was trying to get information out of him.

Luc Michaud was granted full parole, at age 53, on May 6, 2005. In 2001, Michaud convinced a jury that he merited a chance to be eligible for parole before 25 years, which is standard for first-degree murder convictions. He made the request through the so-called faint-hope clause, a part of the Criminal Code that has since been repealed.

“I sincerely regret participating in that slaughter,” Michaud told the jury in 2001 while denying he actually shot anyone that day. “I had no right to decide anyone’s fate, even if they were like I was at that time.”

He also told the jury he had found God after he was convicted and that the Hells Angels kicked him out of the gang in 1993 because he constantly criticized other gang members who were incarcerated with him. The jury agreed and decided to reduce his parole eligibility date to 15 years.

Robert Tremblay was granted full parole, at age 50, on Aug. 30, 2004. Tremblay followed Michaud’s lead and convinced a jury, in 2003, that he also had changed enough, since taking part in the murders of five men, that he merited a chance at an earlier parole eligibility date.

The police had evidence that Tremblay quit the Hells Angels in December 1995, shortly after an appellate court refused to hear an appeal of his murder convictions.

“My identity was the (Hells Angels). I sincerely deplore having taken the life of another person,” Tremblay told the parole board before he was granted a full release. “I am very aware that I have to watch out for who I associate with and that I have everything to lose if I return to the criminal world.”