Tom Thomson  was a Canadian artist of the early 20th century. Born August 5th, 1877 he is linked with Canada’s most celebrated group of painters, The Group of Seven,  though as an unofficial member with his art usually being exhibited adjacent to the group’s in Canadian museums.

Thomson died in 1917. Despite a short career his work has been very influential in Canadian art. The tragic circumstances of his death at Canoe Lake in Algonquin Park, Ontario have lead many to speculate that Thomson was murdered or possibly committed suicide. The Myth and mystery of Tom Thomson continues to this day.

Thomson was born  in Claremont, Ontario, Canada. He grew up in a large family, the sixth of John and Margaret Thomson’s ten children. Thomson was raised in Leith, Ontario, near Owen Sound. Thomson and his siblings enjoyed both drawing and painting, though he did not immediately display any major talents. He was eventually taken out of school due to a respiratory issue, allowing him the freedom to explore the woods near his home and develop an appreciation for nature. He was a good athlete and enjoyed playing football.

In 1899, Thomson volunteered to fight in the Second Boer War, but was turned down because of a medical condition. He would attempt to enlist for the Boer War on three occasions but was denied each time.

Thomson briefly enlisted at the Canadian Business College in Chatham, Ontario, worked briefly for his older brother George at the Acme Business School, and traveled as far as Seattle where he worked as an elevator operator at the Diller Hotel.

Thomson was hired at Maring & Ladd as a pen artist, draftsman and etcher. He mainly produced business cards, brochures and posters. In 1904 he abruptly left Seattle and returned to Ontario, possibly due to a rejected marriage proposal following his brief summer romance with Alice Elinor Lambert.

Thomson moved to Toronto in the summer of 1905. His first job upon his return was at a photo-engraving firm, Legg Brothers. Friends described him during this time as “periodically erratic and sensitive, with fits of unreasonable despondency.”

During this time, he briefly studied with William Cruikshank, a British artist who taught at the Ontario College of Art. Cruikshank was likely Thomson’s only art instructor, as Thompson was largely self-taught.

In early 1909, Thomson joined Grip Ltd., an artistic design firm in Toronto, specializing in design and lettering work. Grip would eventually employ  Arthur Lismer, Frederick Varley and Franklin Carmichael, soon to be members of The Group of Seven.

Thomson first visit to Algonquin Park  was on a canoe trip in May 1912. Thomson’s original painting style began to emerge at this time. Though his work was not outstanding technically, there was a noticeable ability with composition and colour. Thomson traveled around Ontario with his colleagues, especially to the wilderness of Ontario, which was to be a major source of inspiration for him. To earn money, Thomson sometimes worked as a guide or fire ranger in Algonquin Park. He became as familiar with logging scenes as with nature in the park and painted them both. 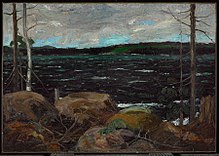 On July 8, 1917, Thomson was seen with Shannon Fraser, the owner of the Mowat Lodge. When it was too cold to camp in the park, he would often spend the night there.  Mark Robinson, a park ranger, noted in his diary that Thomson “left Fraser’s Dock after 12:30 pm to go to Tea Lake Dam or West Lake.”

Thomson disappeared during this canoeing trip on Canoe Lake. His body was discovered in the lake eight days later.

The body was examined by Dr. Goldwin Howland who concluded that the official cause of death was drowning. The coroner, Dr. Arthur E. Ranney, MD, supported Howland’s conclusion that the drowning was accidental. The day after the body was discovered, it was interred in Mowat Cemetery near Canoe Lake.  Under the direction of Thomson’s older brother George, the body was exhumed two days later and re-interred in the family plot beside the Leith Presbyterian Church near Owen Sound.

Many conspiracy theories have swirled around the nature of Tom Thomson’s death, including that he was murdered or committed suicide. Though these ideas lack substantiation, they have continued to persist in the popular culture.

In 1970, Judge William Little’s book, The Tom Thomson Mystery, recounted how—in 1956—Little and three friends dug up Thomson’s original gravesite, in Mowat Cemetery on Canoe Lake. At the time they believed that the remains they found were Thomson’s. In the fall of 1956, however medical investigators determined that the body was that of an unidentified Aboriginal.

In 2007, the Great Unsolved Mysteries in Canadian History project launched “Death On A Painted Lake: The Tom Thomson Tragedy,” a book-length, bilingual (English/French) web site featuring a selection of over fifty transcribed primary and secondary documents related to Thomson’s death, including documents never before made public, such as Blodwen Davies’ 1931 request to the Ontario Attorney General for opening of Thomson’s Algonquin Park burial site.

Utilizing, in part, the Great Unsolved Mysteries site transcriptions, Canadian newspaper columnist Roy MacGregor has described his 2009 examination of records of the 1956 remains unearthed by William Little (the remains have been reburied or lost) and concluded that the body was actually Thomson’s, indicating “that Thomson never left Canoe Lake.”

In an essay entitled, “The Many Deaths of Tom Thomson,” published in 2011, Gregory Klages describes how testimony and theories regarding Thomson’s death have evolved since 1917.  Assessing the secondary accounts against the primary evidence, Klages concludes that Thomson’s death is consistent with the official assessment of ‘accidental drowning’. Historians Kathleen Garay and Christl Verduyn state, “Klages’ forensic archival sleuthing does provide for the first time some degree of certainty regarding this event.” Klages expanded on these ideas in a book with a similar name, The Many Deaths of Tom Thomson: Separating Fact from Fiction, published in 2016. He particularly challenges MacGregor’s claims, suggesting MacGregor is guilty of misrepresenting evidence.

Many of Thomson’s works bare witness to the destruction of Canada’s old growth forest at the hands of the Canadian lumber barons:

Who Killed Theresa server halfway restored, and named after Robert Peel = a good sign.
Website down means I go back to writing in Word. You guess the episode I'll be mighty impressed:
I recently did an interview with Mike Arntfield for the podcast, Suspect Zero on suspected serial killer Luc Gregoire. You can watch on YouTube:
Gatineau police with their tent on the 10th anniversary of Valerie Leblanc's murder. And here's the SQ in 2018 with their MCU in 2018 for Helene Monast in Chambly.
And STILL Claude follows me on Twitter!
Valérie Leblanc - well you knew eventually these guys would weigh in: